Lessons from the Fred Korematsu case: A Talk by Dale Minami

Thank you for attending our webinar, "Lessons from the Fred Korematsu Case: A Talk by Dale Minami".

It was great seeing so many people from around the federal government and around the country take interest in this topic!

Thanks to Dale Minami for being our guest speaker, Rebecca Lee, WHIAANHPI Deputy Director, for inaugurating our first AAFEN event, and our ERG co-hosts and allies for spreading the word, thank you!

We understand the time is now to devote more effort at organizing against AAPI hate in all its forms and will be continuing our video series in the months ahead, so please stay tuned!

For those of you who couldn’t make it, you can find the video below or go to the AAFEN YouTube Channel.

That’s all for now, thank you for joining and we look forward to being in touch again!

AAFEN is dedicated to fighting discrimination against AAPIs in the federal government. Share your story of injustice and add your voice to the growing chorus of individuals advocating for equality. Schedule a 30-minute, informal Zoom with Michael Young, AAFEN Co-Founder, by clicking here.

AAFEN is an all-volunteer organization and we are actively fundraising to establish a long-term effort at fighting the new face of discrimination against AAPIs in the federal government and beyond. Please support our effort by donating today! 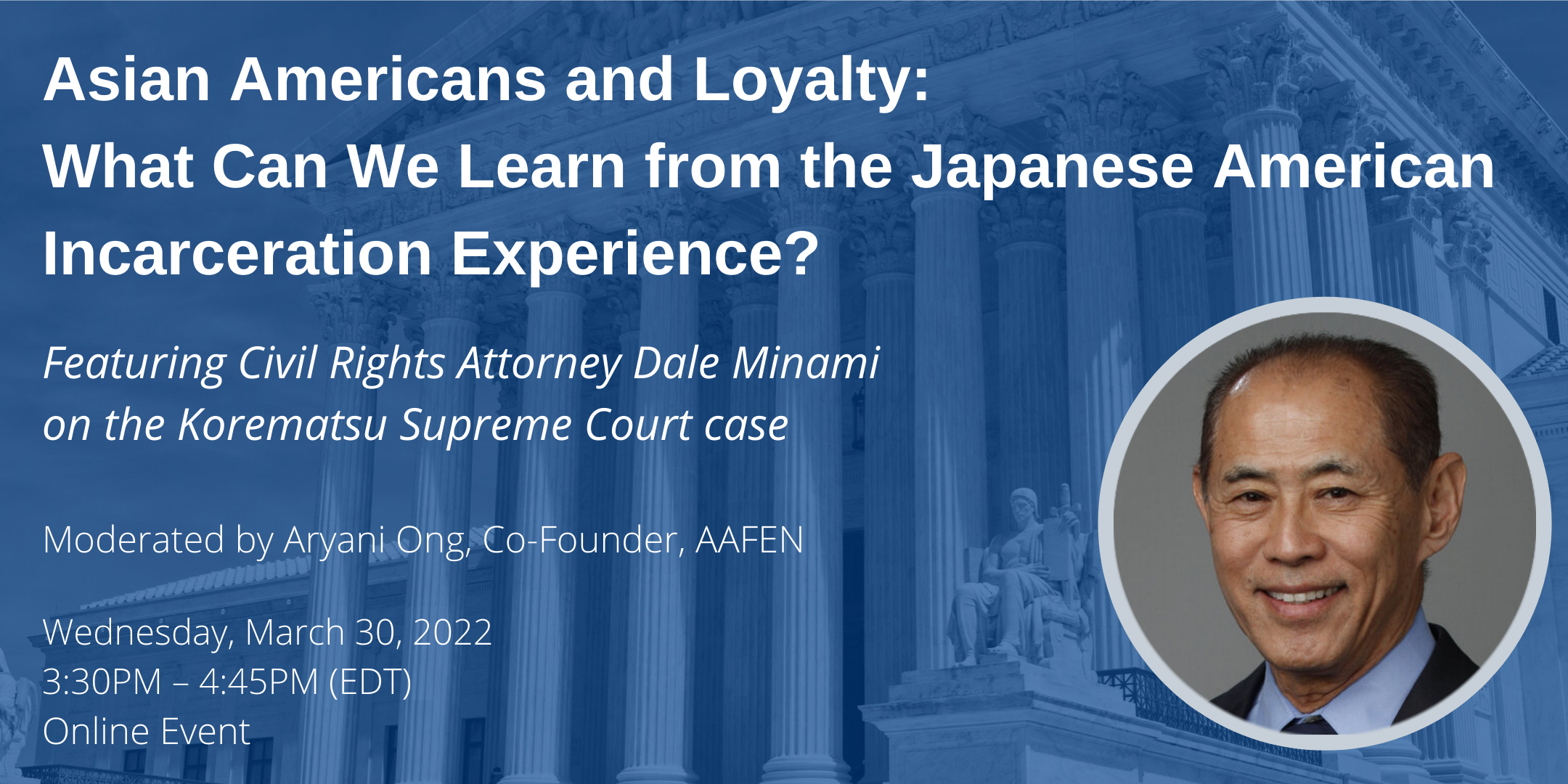 In 2022, 80 years after 1942, 1 in 5 Americans believe that Asian Americans are more loyal to their country of origin than the U.S. What did we learn from the past that we can apply to the present? Civil rights icon Dale Minami speaks on the landmark US District Court for the Northern District of California case that overturned a Japanese American incarceration era conviction and answers questions on the Asian American movement toward racial equity, inclusion and belonging.

Dale Minami was the Lead Attorney for a team that represented Fred Korematsu in the District Court case in 1984 which vacated Korematsu’s conviction, upheld by the United States Supreme Court in a landmark ruling in 1944. Korematsu had defied the WWII order to report to an incarceration camp. The Korematsu case, together with other cases, advanced the Japanese American reparations movement. Over 120,000 Japanese Americans – 2/3 of whom were U.S. citizens - were incarcerated in prisons. Later, Minami, representing the adult children of Korematsu, with the same team also filed an amicus brief in the U.S. Supreme Court review of the government’s travel ban, which resulted in the High Court’s repudiation of the 1944 Korematsu decision via its review of Trump v. Hawaii. Source: American Bar Association.

Asian American Foreign Affairs Association (AAFAA) is an association of Foreign Service and Civil Service employees, contractors, interns, and retirees with the mission to improve recruitment, outreach, and professional development of people of Asian and Pacific Islander descent at the U.S. Department of State. As this is a private U.S. government-affiliated Employee Action Group (EAG), we can only consider membership for those with direct relationships with U.S. federal government agencies.

US Department of Commerce AAPI Employee Resource Group's mission is “to support the Department in addressing issues of interest to the Department’s Asian American and Pacific Islander (AAPI) community and to foster professional development and networking among its members.” Note: the webpage is only viewable to federal employees with a PIV card.

The mission of the Native Hawaiian and Pacific Islander Employee Resource Group (NHPI-ERG) is to identify areas for growth and improvement in diversity, inclusion and equity and provide recommendations to NOAA Leadership in order to improve and enhance recruitment and retention and better support the professional development and advancement of underrepresented Native Hawaiian and Pacific Islander (NHPI) employees in NOAA. NOAA Employees can access our internal website.

The GSA AANHPI Affinity Group's mission is to maximize career opportunities, belonging, growth, education, and engagement for current and future Asian American Native Hawaiian & Pacific Islander employees by creating a safe space to support the AANHPI community so that we can use the power and recognition we create to uplift other communities across the agency.